John Thomas (JT), MD, FSIR has given generously to many throughout his career and his 28 years as a member of the Society of Interventional Radiology. Dr. Thomas learned the foundations of medicine at the University of Texas Medical School at Houston (now known as McGovern Medical School), where he also met his future wife Azreena B. Thomas, MD. Together, they have given back to their communities through many generous charitable donations, including to the SIR Foundation. The Thomas’ have two daughters, Jenna and Alyssa. Alyssa is working on her undergraduate degree at Furman University in Greenville, S.C. Jenna is in her first year of medical school at McGovern Medical School in Houston, the same school that the Thomas’ met.

Dr. Thomas has been a leader in his hospital system, including servicing as Chief of Staff of Methodist Hospital in San Antonio.  Prior to his 23 years in private practice in San Antonio, Dr. Thomas spent 5 years as an academic IR, teaching and publishing. He graduated AOA from the University of Texas Medical School at Houston in 1988, followed by a radiology residency at Baylor, graduating in 1993. While a resident, he performed the first TIPS procedure in Houston in 1992. He completed his fellowship at Massachusetts General Hospital in 1994

Dr. Thomas was awarded the SIR fellowship in 2020 and has served on the Interventional Oncology Taskforce (IO TF). Additionally, he has coordinated multiple workshops at the SIR Annual Scientific Meetings. He began with Internet workshops, where he taught members how to do email, and worked up to advanced skills of building websites. He has actively taught on topics including gene therapy for vascular disease, and regional anesthesia, including nerve blocks for UFE/PAE procedures.

The Frederick S. Keller, MD, Philanthropy Award honors an individual who, through exceptional generosity and through inspiring others to give, demonstrates outstanding commitment to SIR Foundation.

To learn more about this award, please contact the SIR Foundation Development Team 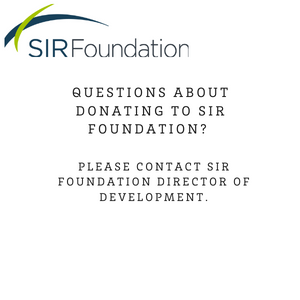